The Role of the Mind in Physical Training and Athletic Development

As with my previous post, the topic of this entry came about from yet another argument with my brother (yes, this happens quite frequently). This time it was concerning the role of the mind, and more specifically, the role of Sport Psychology in exercise performance. He claimed, and still maintains, that “Sport is 90% Psychological, 10% Physical”, often citing how he, as a manager and a player, saw more great players fail to make a team or perform under pressure due to psychological issues such as stress, lack of focus, or what my brother called “mental toughness”, or lack thereof. I’m sure there are many coaches that would share this view. I, however, do not. I Always put psychology at the 40% contribution marker. After all, I was certainly NOT a “mentally tough” athlete. I always say I never got in the ring thinking I would win. The opposite was true. But my insecurities and fear of failure was actually what drove me to train as hard and as often as I did. It was these insecurities that made me seek out Pete Taylor as a coach, under whom I won County, National and International medals. I always placed more emphasis on the physical elements, which includes skill as well as fitness, rather than the Psychological.

However, as my time as a coach has increased, so too has a perspective on Psychology in Sport Performance. Now, I’ve never debated that a coach must have a firm grasp on, at the very least, practical psychology, e.g. motivation, pedagogy (the art of teaching) and the like. Its the athletes independent use of psychological techniques that I struggled with, due mainly to my own personal biases.

But when a couple of studies came to my attention, things started to change. The first (Ariel et. Saville, 1972) basically took 15 experienced college athletes and observed their strength progress in certain lifts such as the Bench Press and Back Squat over an  uninterfered period. They then gave 8 of the 15 athletes an Anabolic Steroids (Dianebol) and measured their progress after the same amount of time. Naturally, the “Steroid” group increased their lits by nearly double the amount as when they trained without the drug. Hardly surprising right? The real shock comes when the study explains how they only gave the athletes placebos (sugar pills). Not steroids. This means that the athletes doubled their improvement in strength by simply BELIEVING they were stronger from the steroids.

Another study quoted in Verkhoshansky and Siff’s book Supertraining (a book I’ll be reviewing in my next blog post), showed a group of Russian athletes who were instructed to lift an empty barbell while visualizing or imagining they were lifting the maximal weight they could lift for that movement. When retested they showed an increase in strength for that lift despite doing no other training for that lift.

So that shows psychology’s value in improving strength but what about endurance? What about Speed and Power? And, perhaps most importantly, what about Skill?  This is where shit gets really interesting. 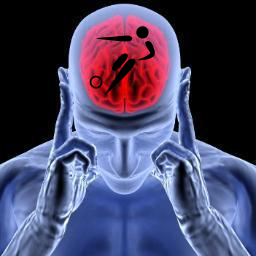 Well, in the case of endurance, two studies showed a very profound effect of psychological state and activity on performance. The first study (Greig et. Al., 2007) took 10 semi-professional soccer players and put them on a treadmill, replicating a full football in terms of pace, duration and rest periods, such as including a 15 minute “half time” period in between the drill. They ran two trials, one with just the physical work on the treadmill being done, and another with an added mental task to be completed while carrying out the treadmill running. When measuring saliva, blood, heart rate and the athletes perceived effort they found that when the athletes performed the mental task, their heart rates were lower throughout the exercise, they had reduced blood lactate, meaning less “muscle burn”, and the athletes recorded a lower perceived effort than when completing the physical tasks alone. Showing a clear physiological improvement in endurance qualities. The second study (Albiol et. Al., 2001) they put 18 elite cyclists through a similar endurance exercise both with and without completing a mental task. And again similar results were observed.

And for Speed, a study on tennis players found an decrease in reaction time from players who practiced visualizing potential tennis situation than those who merely physically practiced the sport itself (Singer et. Al., 1994). However research in that area is a little more rare. While skill has a little more peer reviewed research weighing it down. For example, a study in 1985 took thirty college students of equal (perceived) skill and gave them a putting challenge, telling one group to imagine the ball going in the hole, another group to imagine the ball missing the hole, and giving a third group (the control group) no mental task (Woolfolk et. Al., 1985). As you would expect the group imagining a successful shot saw skill improvement overtime with the control also showing improvement, though not as large as the visualization group, and the group imagining an unsuccessful shot saw their performances deteriorate over the test period.

So, does this prove the 90% psychological theory my brother possesses? Actually no, I don’t think it does.

For one, all of these studies were done on experienced sportspeople and athletes, who generally have a fairly good basic level of physical conditioning. Even the experiment on the tennis players explained how most of the beginners were actually experienced players that were accepted into the beginner group anyway. And when looking at visualization in skill improvement there have also been studies showing no significant improvement despite mental training (Epstein, 1980), with the study concluding that the negative results from some female subjects suggested that they could have found the mental training as more of a distraction than a helpful method of training.

On top of this we continuously see a link in cognitive performance and physical fitness, with one such example being shown in the academic improvement of young students after being subjected to physical training and an enhanced level of fitness and physical well-being (Taras, 2009). Showing an increased capacity for cognitive learning as a result of purely physical training. We also see Exercise continuously improve psychological conditions such as depression and anxiety through, and I quote, “a reducing effect on anxiety,…improve(d) self perceptions, and in some cases global self-esteem…and enhanced mood states” (Fox, 1999). And it is well documented that training modalities such as balance and resistance training improves proprioception (the body’s innate awareness of itself in space) and so facilitates learning of new motor patterns on a neural and muscular level (NSCA, 2008).

So while Psychological training certainly seems to benefit athletes, it would seem that physical conditioning has, at the very least, an equal if not greater, impact on the mind and the ability to learn.

So where do I stand now on the Psychological contribution to Sports Performance and Development? In my view the mind and body are invariably linked, that is to say, one can only develop so far without the development of the other. The fact is, it is and always will be, impossible to put a figure such as percentage on the contribution of either the physical or psychological factors of fitness, especially considering that each athlete operates differently and has different views on the matter, a fact that is emphasised in the opening paragraph of this post. But I certainly think it is foolish to consider either factor more important than the other and train as such. In the author’s opinion the most important principle to implement is that of balance in the training program. Particularly in regard to the psychophysiological development of an athlete. So, my recommendations are to screen each athlete individually when possible, both physically and psychologically and apply the appropriate training  methods, be them mental or physical, as needed for the continuous growth and improvement of the person.

However, if an athlete is a beginner with limited training history, then I would certainly recommend an emphasis on the physical side of development, with a more balanced physical and psychological form of training for more experienced and elite athletes.

What are your thought on Sport Psychology and Physical Conditioning in Sport Performance? Let us know in the Comments section. And stay tuned for our Video Blog post on Mental Training techniques and how they can be effectively and practically implemented to improve performance.

Anabolic Steroids: The Physiological effects of Placebos, by Gideon Ariel & William Saville, published May 23, 1972, Science in Medicine and Sports

The effects of positive and negative imagery on motor skill performance, by Robert Woolfolk, Mark Parrish and Shane Murphy, Published June 1985 in Cognitive Therapy and Research

The Relationship of Mental Imagery and Mental Rehearsal to Performance of a Motor Task by Martha L. Epstein, published 1980 in the Journal of Sport Psychology

The Influence of physical activity on mental well-being, by Dr. Kenneth R. Fox, published on 7th of May, 1999, in Public Health and Nutrition