Exercise, Nutrition and Depression: The Possibility for Health Professionals to Treat one of the World’s Deadliest Diseases

This post is dedicated to my Second Year Psych. Lecturer John Byrne and my arch-nemesis in neuroscience Mollie Richardson. Both of whom deserve some payback after boring the crap out of me with their psycho-babble.

Alright, let’s establish something from the offset. I’m not writing this post to tell you how a holistic, healthy lifestyle is good for your mind and well-being and how should treat your body like a temple blah blah blah.

I’m going to assume your not interested in pursuing a life as a motivational speaker. I’m also not going to be telling you how exercise increases blood to the brain and the release of endorphins will help your mental health either (only parts of that statement is true, plenty of athletes have had depressive episodes with drastic consequences; think Frank Bruno!), I’m going to assume you passed school biology.

I want to give you specific, practical and research-backed guidelines of exercise and nutrition for clinically depressed populations.

Suicide rates, along with other common statistics are open to criticism. And there is a tendency for media and institutions to blow things way out of proportion.

For example, Irish media are currently sensationalising Obesity as a huge problem in the country (even though Ireland’s average Body  Mass Index is 23.1 and 84th in the leaderboard for Obese countries (Nationmaster, 2013), but that’s another rant for another time).

However, when reviewing International suicide rate. It’s clear there is a problem. For example, Ireland is joint 20th in the world for suicide (that’s across all age groups and sexes), with the top 10 all being European countries, and when the demographic is reduced to young (15-24 years old) males or females Ireland is usually 12th, with the U.S.A. usually cracking the top 10 (Nationmaster, 2013).

For Irish readers this means that any young male or female is twice as likely to die from suicide than in a motor vehicle (I say motor because it includes bikes and trucks), pretty good news for car insurance companies, less for the people themselves.

And for the yanks, suicide sits as the 3rd highest cause of death nationwide for 15-24 year old males (Reiss et Dombeck, Anon.), though this statistic should be treated with scepticism, keep in mind not many 15-24 year olds are going to get a heart attack so alternate means of death are not as plentiful as older demographics. Also, economic status doesn’t seem to effect the risk of suicide (Reiss et Dombeck, Anon.).

Either way. Suicide happens. And it happens frequently enough to merit a response. Funny thing is, as much policy and structure that has been out in place for suicide prevention and treatment, and, make no mistake, a substantial amount of facilities exist (just Google “suicide help” and see what comes up), there has been little research into the physiology behind depression.

Any doctor or virologist worth their title can tell you how a virus, like a cold, penetrates the body, bypasses or over runs the immune system and infects the body.

Any immunologist can tell you how immune cells like Interferon alpha stops pathogens from multiplying or how M1 or M2 macrophages engulf and swallow these same pathogens and destroy them with nitrogen, or how Natural Killer Cells burst the pathogens like by burning holes in them and using water to pop them like balloons, or even how an autoimmune disease can cause antibodies to attack brain cells or other cells in the body (I know most of this sounds like it’s over-complicated already, but stay with me).

Yet go ask any of these professionals to help you treat depression, or even how it happens. A cool hundred says they’ll recommend you to the nearest clinical psychologist, who’ll promptly have a good chat with you before prescribing anti-drepessants such as Selective Serotonin Reuptake Inhibitors (SSRI’s) and cross their fingers that the treatment works (and that last bit’s not an exaggeration, considering the remissions rates for these forms of treatment are at about 30% (Krishman et Nestler, 2008).

Picture being told you have a 30% chance of permanently surviving cancer, hardly going to make you want to start planning a pension fund. They certainly won’t be recommending nutrition or a diet plan. And yet, there’s actually been studies showing that exercise is actually superior  to both medication AND a combination of exercise and the medication for treating depression (Babyak et al., 2000), just see below. 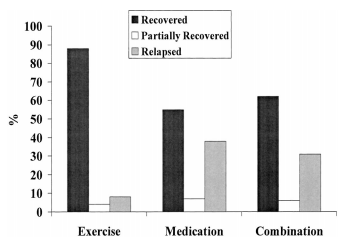 It’s also important to emphasise the fact that not everyone who suffers from depression will commit suicide. Putting depression at an even higher incidence than suicide itself, with a 2005 Survey showing that 16% (that’s 1 in 6) of the American population suffered from clinical depression (Kessler et al., 2005),  and even that was only from 18 years or older, as previously shown depression doesn’t seem to discriminate against minors, its actually pretty reliable in that sense.

It should also be noted that this figure could be even higher, due to many people refusing to report their experiences truthfully due to psychological or social barriers like embarrassment (Möller-Leimkühler, 2002).

Here’s the kicker. Until the mid-2000’s research into the physical effects or predispositions for depression were nearly non-existent, credit to Kessler and his team for leading a lot of the first studies on the molecular and genetic processes related to suicide and depression.

Also, to be fair the technology allowing this type of extensive research is only recent. See, what I wanted to know was is there an underlying cause to depression, is it something that can be identified, treated, cured, prevented.

Because, if we don’t know the former, we have feck all (for all non-irish readers, replace the “e” with a “u”) chance of developing the latter.

So, let’s look at Kessler’s work.

Kessler and his team wrote a fantastic analysis piece on the physiological processes of depression back in ’05. Without delving too much into detail, this is what they found:

Exercise and Nutrition’s impact on Depression:

Alright, so, we know the illness, some theories on what’s causing it and some really cool links with exercise and nutrition. Let me explain, see BDNF and VEGF above showing how they help the growth of brain matter and help protect the brain? Well, they’re also pretty big players in the body’s adaptation to Aerobic exercise (Wackerhage, 2013).

Simply put, regularly participating in Aerobic exercise causes these signalling factors to increase and facilitates neurogeneration, a.k.a. the formation of new brain cells.

Could only be theory though, right? But with a recent study that showed a correlation between VO2 Max (the Aerobic capability or ‘fitness’ of a person) and incidence of depression, with the higher the VO2, the lower the incidences (Tolmunen et al., 2006), it presents some promising preliminary evidence.

Aerobic exercise has also been shown to decrease inflammation in the body (Peterson et al., 2005).

And see the Ghrelin and Leptin hormones mentioned? As mentioned, those guys are really heavily involved with hunger, eating and body weight maintenance.

Ghrelin is known as the Hunger Hormone and, when food is eaten and digested, the hormone goes down, but exercise and inducing a calorie deficit through dieting methods like Intermittent Fasting, causes an upshoot in this hormone.

You know that “I’m Stuffed!” feeling? That’s caused by a combination of Ghrelin suppression and Stomach distension, along with a few other hormones like CCK and Neuropeptide YY, and you know that, “I’m Starving!!” Feeling? That’s also caused by Ghrelin.

Meanwhile Leptin is released from Fat cells, mediating how often we feel hungry during the day (Wackerhage, 2013). However, too many fat cells releasing Leptin causes “Leptin Resistance”, shown in obese populations, which reduces the hormone’s effect. So chowing down on a couple of Big Mac’s won’t be touted as a cure for depression anytime soon.

And vitamins like Vitamin C, Vitamin A and Co-Enzyme Q10 (to a lesser extent) have been shown to be potent anti-inflammatorys in their own right (Middleton et al., 2000).

Okay, so Vo2max=aerobic fitness! So why not just run the shit outta them and give them a bowl of vegetables?!

Not so fast, one of the biggest problems of depression is the distinct loss in patient motivation (Jeong et al.,2009). You know when you come home from a long day and don’t fancy a jog because you’r a bit drained?, multiply that by 10 and that’s what we’re dealing with!

Plus, cardio is not the only way to go, much to the relief of any gym rats who’ve been feeling a bit low, resistance training has shown to be just as effective and even more effective in some studies (Penninx et al., 2002).

Plus, resistance training is much more time-efficient and easier to start with for beginners, as opposed to long steady state cardio or High Intensity Interval Training.

And I personally prefer weight training due to the associated muscle gain and body image change. I also found it more beneficial than cardio for mood in my dissertation study in my (admittedly healthy) subjects.

Also, a simple multivitamin and mineral tablet has been shown to be effective in improving depressive mood (Harris et al., 2011).

Once again, a multivitamin tablet is a lot more client/patient friendly than a bowl of veggies, not to say if they prefer the latter you should insist on the tablet.

And Omega-3 supplementation has also been show to improve the effects of bipolar depression  disorders (Sarris et al., 2012).

Carbohydrates have also shown to increase Serotonin, the feel good hormone that gets blocked off by the cells in depressed populations, in the brain (Fernstrum et Wurtman, 1971) so “carbing up” can’t hurt either.

So, theory done! Let’s get down to the brass tax!

Worldwide Statistics on BMI, Health and Disease, 2013, available at: http://www.nationmaster.com/country-info/stats/Health/Diseases/Overweight/Average-Body-Mass-Index-(BMI)

Worldwide Statistics on Suicide in Young Males, 2013, available at: http://www.nationmaster.com/country-info/stats/Health/Suicide-rate/Young-males

Möller-Leimkühler, A. M. (2002). Barriers to help-seeking by men: a review of sociocultural and clinical literature with particular reference to depression. Journal of affective disorders, 71(1), 1-9. Available at: http://www.ncbi.nlm.nih.gov/pubmed/12167495